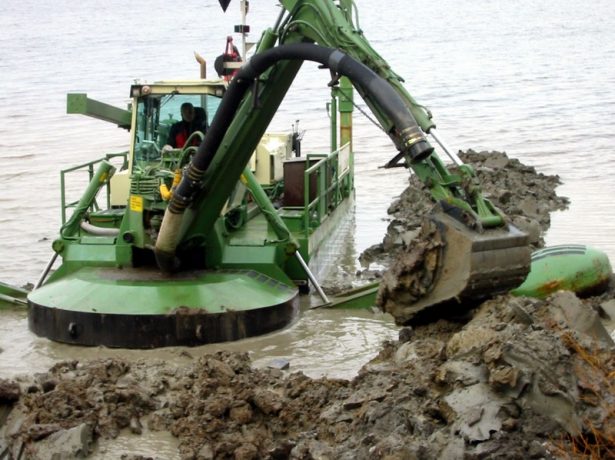 About the silt of a lake, swamp, river, from gutters, ponds, septic tanks: what and how can be used for the garden

If you still did not know anything about the benefits of silt for the garden and only vaguely imagine what sapropel is, then it's time to start studying the properties of this fertilizer. And at the same time find out: where to get it, how to apply it, and is it true that river silt is worse than lake silt.

Why silt is a valuable fertilizer

Sludge is a dirt-like substance that accumulates at the bottom of a reservoir. If the reservoir is of natural origin and freshwater, then the bottom sediments are called sapropel.

Sapropel - centuries-old bottom sediments of freshwater reservoirs, which were formed from dead aquatic vegetation, the remains of living organisms, plankton, as well as particles of soil humus, containing a large amount organic matter, humus: ligninumus complex, carbohydrates, bitumen and others in a colloidal state.

Sludge is deposited at the bottom for centuries and even millennia, over time, the lower layers turn into bound sedimentary rocks. And the upper ones are actively mined and used in agriculture.

Silt, or sapropel, in its natural state is like dirt

What sludge consists of

This question is easy to answer on your own if you imagine the life of the underwater world. There are:

Scientists have discovered many useful elements in silt sapropel.

Plants in the garden react to the introduction of sludge with a tangible increase in yield. Amateur eyewitnesses say that on the silt the same green manure grows 3-4 times faster and gain twice the mass of that which grows on land without silt, although fertilized with humus.Agronomists estimate that the use of sapropel increases crop yields by 50–100%.

About the benefits of sludge

But you can’t make silt thoughtlessly, you need to know the structure and properties of the soil in your area:

It is not enough to know the peculiarity of your soil, you also need to understand the silt itself, its chemical composition, which can be brought into the soil.

Lake sapropel: how it is mined and processed

Lake sludge is considered to be the most useful for plants - sapropel.But even within the limits of one reservoir it can vary in chemical composition. There are 4 types of sapropel:

According to the composition of silty sediments and determine their purpose. Lacustrine sapropel in industrial production:

Lake silt is mined from a depth of at least 1.5–2 m.It is difficult to get it on your own. Although in the video below there is a story about a silt miner who used a scoop with holes on a 3-meter handle.

Swamp silt is equivalent to lacustrine in quality. It contains a lot of humus, and added to compost or manure neutralizes feces and contributes to their rapid decomposition. Moreover, there is also a bog type of sapropel, which for technical reasons is impossible to obtain. Not even the exploration of such reserves.

You can independently try to find and collect sapropel, if there is a familiar swamp. It’s better not to go to a stranger, especially alone.

River silt, why they should not be fertilized

River sludge is also good, on one condition: no harmful effluents should flow into the river.Today, only small streams and streams that flow away from civilization are environmentally friendly. It is no coincidence that there are signs on many beaches: “Swimming is prohibited.” The water in our rivers does not meet sanitary standards, it will not be useful and silt from them, as well as vegetables grown on such a dubious fertilizer.

For the above reasons, sludge is not extracted from rivers on an industrial scale. Sludge deposits obtained during the treatment of sewage and ditches, which must be put somewhere else, are another matter.

The bottom sediments from such sources are trying to process into useful fertilizer, but so far with varying success.

Sludge pond in its formation is actually a pond soil and can contain substances that are harmful to plants, such as humus acid, or a soluble salt of ferrous oxide.

In the silt from the ditches, gasoline, oils, heavy metals are also found.But they also use such good purification:

In domestic conditions, such sludge can be obtained from your own septic tank - this is the sediment at the bottom. It is not recommended to apply it directly to the soil, but you can add it to the compost with a layer or film in the same way as you add kitchen waste to the compost.

It is important to know that:

According to the fertilizing properties, sewage sludge can be considered as organo-mineral and organic fertilizers similar to organo-mineral composts, bedding or bedding (liquid) manure.

How to use sapropel in a garden plot

If you yourself have obtained sludge from an ecologically clean reservoir, then there is no sense in drying it, weathering it, freezing it. Can be applied to wells and pits diluted with water or in pure form. Doses depend on the amount of sludge available and the ability of the earth to absorb it. There is an experience of pouring liquid sludge directly from a reservoir using a pump and a hose.

If there is any doubt about the purity and quality of the sludge, it is better to add it to the compost or to spread it on the ground in the fall, so that it wears and dries, and in spring use as humus. The most convenient way is to buy sapropel in the store.You can apply sludge at any time of the year, but it will bring more benefits to the plant at the very beginning of growth.

How and when to bring dry sapropel from the store:

These are just rough recommendations, since sapropel is sold today in liquid, in powder, granules. For example, it is recommended to first granulate it and soak it by analogy with the purchased bird humus.

Any silty deposits contain organic matter and a set of mineral elements. But if they are not extracted from an ecologically clean reservoir, their quality and benefits are called into question. Not everyone has the opportunity to get the best sludge (sapropel), but everyone can buy it in a store for gardeners and use according to the instructions.