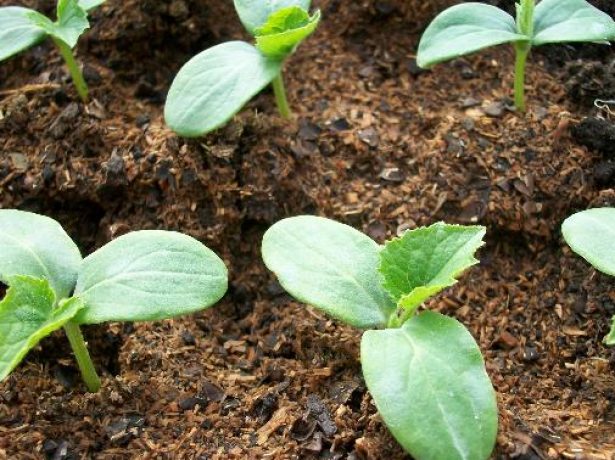 Cucumbers are deservedly considered rather capricious and tender plants, negatively reacting even to minor flaws in agricultural technology and deviations from optimal growing conditions. Seedlings are especially sensitive in this regard. Therefore, gardeners are constantly inventing new methods to increase its resistance and quickly get healthy, powerful and developed seedlings. Popular, for example, Japanese technology, involving the planting of seeds in a special substrate - sawdust.

The main "trick" of the Japanese technology for growing cucumber seedlings is the use of sawdust instead of the usual substrate. In the same way, seeds of other Pumpkin seeds can be planted - in seedlings of zucchini, squash, melons, watermelons, pumpkins, a delicate root system that is easy to damage during transplantation.Landing in sawdust allows you to transfer them to the ground so that the roots do not suffer.

Cucumber seedlings grown in ordinary soil, when transported to the garden, are experiencing severe stress, losing a significant part of the root system

Advantages of the technique:

The main drawback of the method is that it is necessary to find a high-quality "substrate" for seedlings of cucumbers. For example, sawdust from fiberboard and particleboard will not work - they are “enriched” with glue, dyes, formaldehyde and other chemicals harmful to plants. Therefore, to get them at the nearest furniture factory is not an option. It is better to look in the vicinity of the sawmill or contact a neighbor who cuts firewood. Another perfectly suitable, albeit more expensive, option is wood cat litter. Sawdust is also sold in agricultural stores.

Choose them, guided by the following criteria:

For cultivation according to the Japanese method, any early ripe varieties and hybrids of cucumbers that do not require pollination by insects are suitable.In connection with earlier planting dates, the latter may cause problems. But it is still advisable to choose seeds zoned for this region, adapted to the peculiarities of the local climate.

Practice shows that the most strongly positive changes compared to the traditional method of cultivating cucumbers are noticeable when planting modern high-yielding hybrids, which are usually very sensitive to flaws in agricultural technology.

The main focus of the Japanese methodology is growing seedlings. There is nothing complicated in the procedure. Dates for planting seeds are determined according to the recommendations for a particular region. 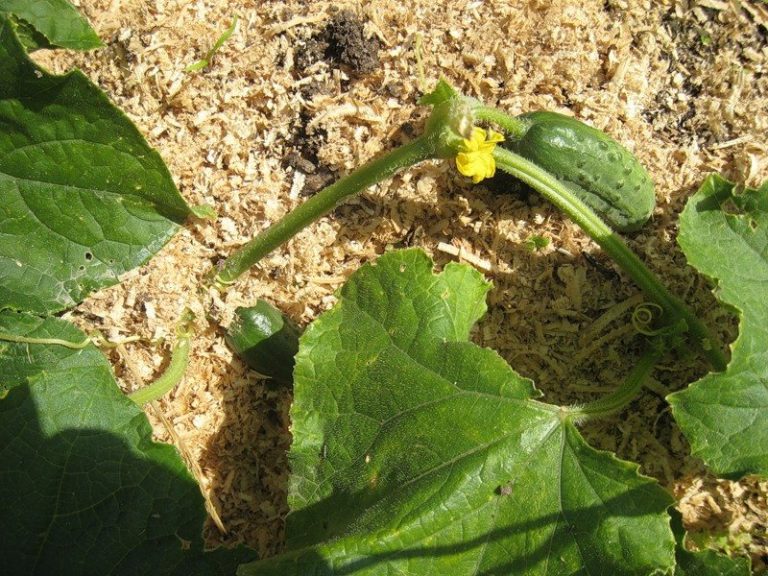 Seedlings are ready for planting after the appearance of the first true leaf.Some gardeners generally wait only for the full opening of cotyledon leaves. The period of its cultivation is very short - no more than 10-12 days. Caring for it consists only in timely watering. Keeping cucumbers in sawdust longer is not recommended, because such a substrate does not contain any nutrients necessary for seedlings to actively build green mass.

To transfer the cucumbers to the garden, about an hour before the procedure, they are plentifully watered with warm water. Saplings are removed from the container one by one with a spoon, shake off the excess sawdust from the roots or wash them off with water.

Landing is carried out according to the scheme recommended for a given variety or hybrid. A teaspoon of phosphorus and potash and 2-3 pinch of nitrogen fertilizers are placed in a hole 6-8 cm deep, spilled abundantly with water. The "dirt" formed at the bottom is mixed and planted with cucumbers, buried to the first cotyledon leaves.

After planting, the plants are again moderately watered and mulch the soil with the same sawdust. During the season, the layer will need to be updated several times. Mulch will protect the roots from overheating, keep the soil moist longer, allowing you to increase the intervals between watering (this is especially valuable for gardeners who are not able to constantly live on the site) and save time on weeding.Sawdust is also useful in protecting cucumbers from many pests in the soil, such as slugs, caterpillars.

If there are no other sawdust except conifers at hand, you can mulch the garden with them.In the autumn, to avoid soil acidification, be sure to add dolomite flour, wood ash, powdered egg shells when digging.And during the season, do not forget about nitrogen-based fertilizing. In the early stages of plant development, it can be urea, ammonium nitrate. Further, it is useful to use infusions of cow manure, bird droppings, “green fertilizer” (fermented weeds), alternating them with specialized complex fertilizers for cucumbers.

To master the Japanese technology for growing cucumbers is quite simple, the technique is suitable even for beginner gardeners. The main thing is to find a quality "substrate". Planting seeds in sawdust further avoids damage to the roots - this is one of the main causes of problems that occur when transplanting plants into the ground. The technique is not without its other advantages - more active development and early planting of cucumbers, minimizing the risk of infection with fungal diseases and pest attacks.