White wide-breasted turkey: main characteristics, distinctive features of the breed and its advantages 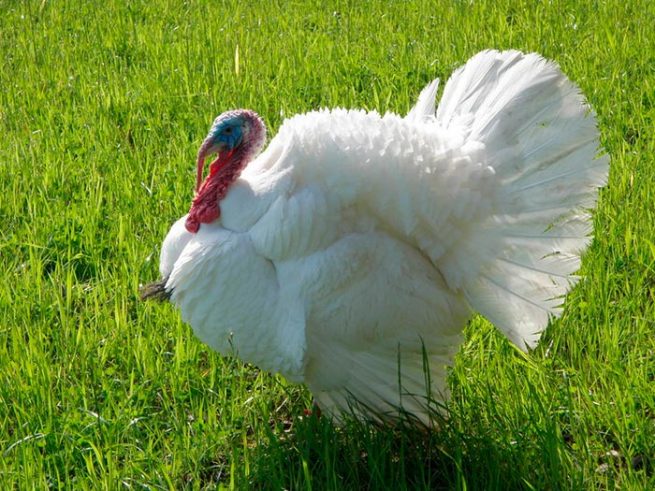 Growing turkeys is quite a profitable business, their meat is a dietary product, and turkey eggs are valuable. You can often meet these birds in private farmsteads. The main requirements when choosing a breed are speed of weight gain, tasty meat and good egg production. You can also include here the attractiveness of appearance, but it is not decisive. One of the most famous breeds - the white broad-breasted turkey, meets all these requirements. In addition to excellent product characteristics, it is still very beautiful, as you can see by looking at the photo.

As the name suggests, the turkey is a snow-white, massive bird with an imposing chest. Among the white feathers, there are several dark feathers on her chest. Because of this arrangement, the feathers are called "medallion". The turkey carries an elongated oval body strictly vertically; powerful pink legs are set wide apart. There is no plumage on the neck and head; they are bright red, like fleshy growths on the head, similar to earrings. The male has a much more developed plumage than the female, especially in the tail. The female has a slightly widened tail, and the male looks like a fan. 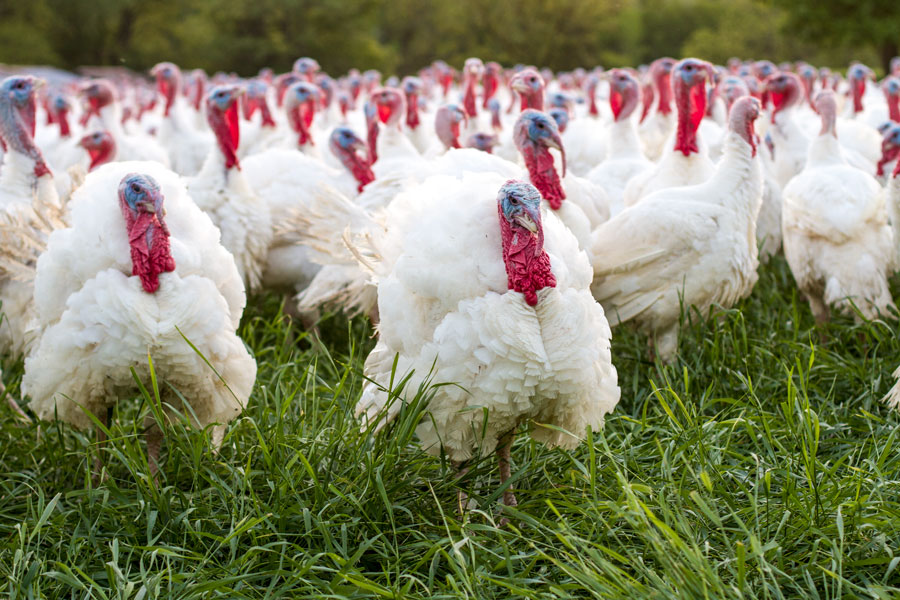 White wide-breasted turkey is docile and calm. Only the male can become aggressive during the breeding season, then the probability of an attack on a person is high. Females become wonderful hens not only for their chickens; you can safely add chicks of other domestic birds to them. One turkey can control up to 80 chicks. It is impossible to leave this breed without long walks, and keeping in cages is generally destructive for them. Requires a spacious house and grazing area planted with edible grasses: alfalfa and clover. The number of turkeys in a herd is 1 in 5 turkeys.

Advantages of the breed

When breeding such turkeys, you can get a dietary product in the shortest possible period, already a few months after birth. The meat yield is 70% or more. The weight of a male turkey of a heavy cross reaches 55 pounds, a female turkey up to 25 pounds. The meat is so tender that even babies can digest it easily. In addition, its cholesterol content is minimal. The female lays eggs from 9 months. This period lasts six months or a little longer. Each bird produces 100-120 eggs, weighing 3 ounces. They are fully fertilized, therefore they have a high incubation value: chicks hatch from 75% of the eggs laid in the laying, and according to the reviews of the owners of this breed of turkeys, the chicks are quite viable. Turkeys do not require any special conditions for full development: they are unpretentious, perfectly adapt to life in different climatic zones, actively breed and rarely get sick, if you follow the basic rules of care.

Attention! A characteristic feature of these birds is considered to be a sharp increase in body weight up to six months and a significant decrease in the rate of weight gain after this date. Therefore, farmers recommend slaughtering as soon as the turkeys grow up to 6 months. The attractiveness of this breed of turkeys for industrial and private breeding lies in the rate of increase in body weight and in the formation of an excellent marketable carcass. Although this breed is meat-oriented, this turkey also carries enough eggs. Healthy and tasty, not inferior to chicken.